A MENTALLY ILL woman who kicked a pregnant woman in the stomach in an unprovoked attack has been jailed for two and a half years at Dublin Circuit Criminal Court.

Dublin Circuit Criminal Court heard that Joyce Conlon (35), who suffers from paranoia and psychosis, also made a racist remark during what a judge said was a “reprehensible” assault.

The injured party, who was eight weeks’ pregnant at the time, began bleeding and was taken to hospital for observation. She gave birth by Caesarean section at 30 weeks.

Passing sentence today Judge Martin Nolan said the pregnant woman had understandably been very frightened and distressed by the assault and the resultant bleeding.

He accepted that Conlon had not known the woman was pregnant when she kicked her “in an unprovoked manner”.

“I must infer that there was a racial motivation to the assault. There was no reason whatsoever for the attack, except that she found the injured party to be different in her clothing and probably her colour,” the judge said.

Judge Nolan said Conlon’s underlying mental condition had been exacerbated by drug use, but accepted that her remorse was genuine and that there was hope for rehabilitation.

Detective Garda Ciaran McGowan told Ronan Prendergast BL, prosecuting, that the victim in the case was from Somalia and had been living in Ireland for ten years.

He said this woman had been standing in front of the INTREO building on Cork Street when Conlon came rapidly towards her and kicked her in the tummy with her shoe.

The injured party said she had a “big worry” for her baby as she felt blood between her legs.

Both the injured party and an independent witness heard Conlon saying “black” something, but couldn’t remember the exact racist remark.

The witness described Conlon making a “jumping kick” with her shoe to the injured woman, who began screaming and crying, “my baby, my baby.”

On arrest, Conlon apologised and admitted that she had “swung a boot” but claimed the woman was “agitating” her.

“I thought she was going to bomb me, she had those weird clothes,” said Conlon. “I think she set me up. I think someone sent her to me. I’m so sorry for the baby, I didn’t think she was pregnant, but I still think she stitched me up,” she said.

Conlon has 50 previous convictions mostly for theft and public order offences, but including one for robbery.

McGowan agreed with Cathal McGreal BL, defending, that Conlon had been diagnosed with psychosis and paranoia and suffered hallucinatory episodes.

McGreal said his client’s psychosis was affected by drug-taking, particularly crack cocaine, and that she had been admitted to psychiatric care several times.

Counsel said Conlon, a mother-of-one, had been clean for long periods and worked as a hairdresser.

The court heard Conlon approached the till with a plastic bag and inserted a knife under the security screen, telling staff to fill up the bag, before they pressed a panic button and Conlon left.

Conlon was sentenced to three and a half years in prison with the final 12 months suspended for the assault charge, to run concurrently with an 18-month sentence for attempted robbery. Somalia’s Jubbaland VP holed up in Mandera over safety concerns 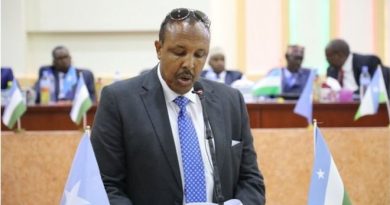